Our Goat Is Famous 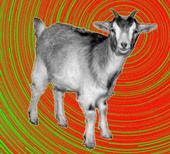 Remember when I told you about Rudy & GoGo, a kids' show that Barry B. and I used to make? I am not sure I ever mentioned that GoGo was a live goat (not composed of archival goat footage as suggested on the inaccurate Wikipedia page). At one point, we ran GoGo Goat for president and had t-shirts made up: "GoGo Para Presidente," which inspired Jon Langford to write and record a campaign song of the same name. Anyway, Barry just discovered that someone wears a GoGo Para Presidente t-shirt on page 30 of a "literary thriller" called CODEX, written by Lev Grossman. Our goat is in a "literary thriller"!

Posted by Jack Pendarvis at 7:27 AM