Thanks to Sheri Joseph 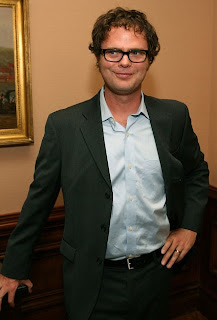 About the reading I missed due to circumstances beyond my control: It turns out that not only did the magnificent Sheri Joseph handle things alone... she also took the time to read a passage from ******* (the book we're never troubling you about again). From what we hear, it was exactly the sort of saucy passage that we are loath to read in public based on our trademark hypocritical and selective prudery. So you go, Sheri Joseph! You go indeed. Sheri Joseph is a true friend and a real trouper. I should mention that Sheri and I had planned to enact - as part of our performance - a scene from the Gilmore Girls episode "Rory's Dance." Sheri was going to be Lorelai (sp?) and I was going to be Rory. Maybe next time! As long as we are not talking about *******, I just got a phone message indicating that a friend or acquaintance of Rainn Wilson (pictured) has presented Mr. Wilson with a copy of the book. Would Mr. Wilson be the perfect actor to portray the title character in a controversial live-action feature based on the novel? I can't say! Because we are never talking about ******* again. When Phil Oppenheim came to one of my readings, he asked during the "Q & A" portion who would play ******* in the movie. I answered Jerry Lewis, of course. It may be remarked that Mr. Wilson and Mr. Lewis share a certain preening menace and a certain gift for slapstick. I can say no more. Please note: I am not implying that Mr. Wilson read or enjoyed *******. I am willing to say that it may be lying on the back floorboard of his car, however, and that is good enough for me.
Posted by Jack Pendarvis at 9:37 AM