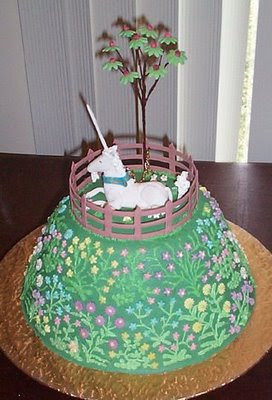 Rhea, a nice young woman who always comes to my library readings in New Orleans, has noted the "blog's" frequent references to unicorns. And she has sent a "link" to a "blog" about cakes, because on this other "blog" there is both a picture of a cake with a unicorn on it (above) AND a picture of a cake that has a picture of the cake with the unicorn on it on it (below). You know how you can go to a bakery now and with their modern technology they will put any photograph you like, in edible icing, on your cake? Well, this time someone wanted a photograph of a cake on a cake. So just imagine if someone wants a photograph of the cake with a photograph of a cake on it on his or her cake, and then someone wants THAT photograph of a photograph of a photograph on a cake on HIS OR HER cake, and so on, into infinity. THINK ABOUT IT! One thing this has taught me: we "blog" about unicorns too much. Maybe it gives the wrong impression - namely, the impression that we wish to "blog" about unicorns. Though I do still wonder if the person from a previous "post" ever found out what to call a horse with wings AND a horn. And also, isn't today's unicorn confined to rather cramped quarters? It bothers me. A unicorn wants to run free! That's my interpretation of the inner life and desires of unicorns. 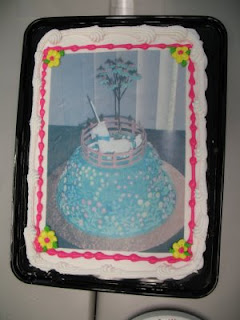 Posted by Jack Pendarvis at 7:46 AM