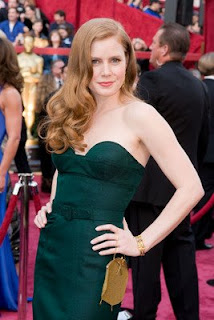 Hello from your "blog" Hollywood gossip factory foreman! According to our inside sources, everyone's favorite ingénue Amy Adams thinks "Blog" Buddy Mark Osborne is "very tall" - and told him so! - at the recent Academy Award luncheon. He was then asked to scooch down, though probably not in those words. I see that "scooch" is not in my dictionary. But that reminds me of something I read in ALPHABET JUICE by Roy Blount Jr. It's a story he got straight from Flannery O'Connor. That's right, he met her! Can you believe it? And she was talking about a man who had referred to a "scrooch owl." She asked him if he meant to say "screech owl." And he said (I will quote now from Mr. Blount's book): "“No, a scrooch owl. That's one of those little owls that land on the same limb as another bird and then scrooch over, and scrooch over, and scrooch him all the way off the end and grab him.”
Posted by Jack Pendarvis at 5:10 PM