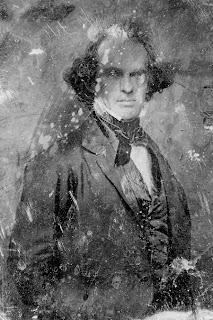 Like McNeil, "Blog" Fan (!!!???!!!) James Sepsey is drawn mostly to the rainbow in the picture of the rainbow-expectorating chicken thing riding on the back of a unicorn to which the OBIL alluded earlier in the day. Sepsey traces the RECTROTBOAU to a passage in the Hawthorne short story "The Celestial Railroad," from which he quotes as follows: "The inhabitants of the cavern, moreover, were unlovely personages, dark, smoke-begrimed, generally deformed, with misshapen feet, and a glow of dusky redness in their eyes; as if their hearts had caught fire, and were blazing out of the upper windows." Sepsey goes on: "Probably the part that’s been left out of most modern editions of the story is a line that goes, 'Plus, friends, I kid you not when I say they were puking rainbows right into the sky!'" The OBIL also adds to his previous statement, rainbow-wise: "The gamecock is clearly a motivational speaker whose oratorical prowess is rendered as rainbows. In Arabic, when someone speaks well 'his mouth drips honey' [there is a similar saying in English - ed.] but this use is an equivalent - it's hard to paint honey." (Pictured, Hawthorne, looking a little "smoke-begrimed" himself.)
Posted by Jack Pendarvis at 5:38 PM