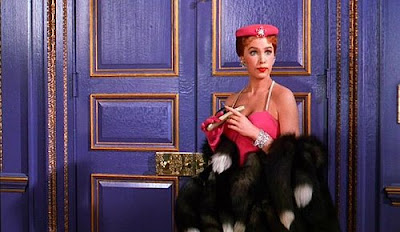 Barry B. reports that the person who tosses used lottery tickets in front of his house is back! Here's the update, straight from Barry B.: "The lottery litterer has struck again. Until last week there hadn't been any lottery tickets in the street since your blog about it. I was wondering if the lottery litterer read your blog. I went out and gathered the lottery tickets from the street. There are about thirty of them. But there is also a type of receipt that at least has the store # and the time they were purchased. The lottery litterer brings me down. I'm going to get him or her. On the brighter side Li'l Abner is on its way via Netflix after last night's screening of The Virgin Spring. There was another brighter side 'thing' but after writing about the lottery litterer I have forgotten it. Oh, I am eating oatmeal for breakfast now as I am cutting out dairy for awhile. I agree with the person who cooks it on the stove instead of the microwave." Thanks, Barry B.! And now some explanation for the folks at home: I saw some of the 1959 version of LI'L ABNER on TCM and thought of Barry right away because it combines some of the most striking aspects of two of Barry B.'s "fave" movies - WEST SIDE STORY (dancers crouching low to the ground) and THE FORBIDDEN ZONE. But it's not like THE FORBIDDEN ZONE on purpose! It is a misshapen thing, I suppose you would call it, a bewildering mess, and I believe I also compared it to some of the more peculiar aspects of Altman's POPEYE, which Barry B. and I have enjoyed together. And it was also incredibly smutty, LI'L ABNER was, the part I saw. I told Barry B. all of this via facebook. And Barry B. told me that by coincidence HE was about to send ME a message about a wrongheaded movie that only I could appreciate! It was like weird movie ESP - or WMESP for short. Wrote Barry at the time, "I was watching the equally disturbing Smokey and the Bandit II. Jackie Gleason played not only the potty-mouthed sheriff chasing the Bandit, but the sheriff's two law official brothers. Three Jackie Gleasons. One of the brothers looked and acted like Rip Taylor and the other was a singing mountie. And then there was a scene where 30 or so semi and dump trucks were up against 30 or so law vehicles and they were driving around in circles running into each other like a rodeo. AND, the Bandit and Jerry Reed's cargo was a pregnant elephant?!? I was sure I'd seen this cr** when I was a kid but I think I would've remembered this one as it was very bizarre." (Pictured, "blog" "fave" Stella Stevens in a scene from LI'L ABNER.)
Posted by Jack Pendarvis at 5:50 PM