"I Hope You're Sitting Down" 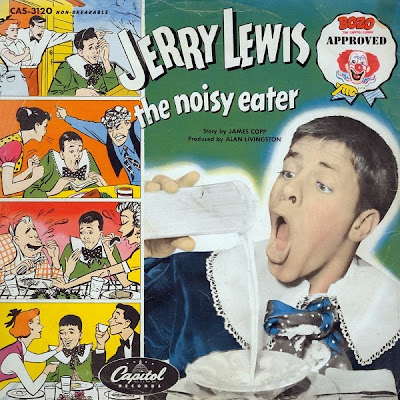 ... was the title of the e-mail in which Phil sent this Jerry Lewis record cover. I was, thank goodness! Because Phil also included a place on the "internet" where you can go and listen to the song and story. In other eating news, New Orleans-born chef John Currence chimes in on the subject of Hubig's pies: "I once fit a whole apple one in my mouth in seventh grade, to try and impress a girl. [Very Jerry Lewisish - ed.] She still doesn't speak to me. I cried when I saw my first one after Katrina. I remember the exact convenience store I was in on Claiborne Avenue. The nice man gave me the pie... Banana is my favorite, but they are hard to find... sweet potato is also extremely good. Put one in the microvave for 15 seconds and it morphs from simply wonderful to transcendent. [Phil agrees. - ed.] I won a big cooking competition in New Orleans last August. When I was done, I had not eaten for about three days. As I collapsed, I was approached by a reporter for the New Orleans paper who wanted to know how I felt after the competition. All I could think was that I was hungry and I told her I would pay a hundred dollars for a hubig's pie I was so famished. She thought it was very funny and put that quote in the story in the paper. A week later, I got a box in the mail from the nice folks at hubig's. In it were 12 hubig's pies, a note of congratulations and an invoice for $1,200."
Posted by Jack Pendarvis at 1:56 PM