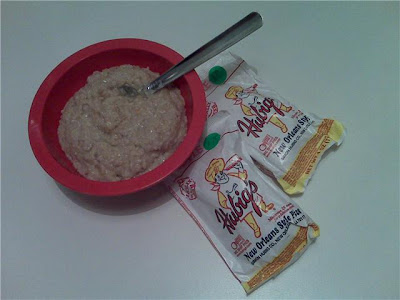 Phil calls this picture "Mardi Gras in Atlanta." We call it "Still Life With Oatmeal" because of how classy we are. Here's what I get from Phil's original title and the picture itself: Phil is sad because he's not at a real Mardi Gras celebration today (which is Mardi Gras). So he tried livening up his oatmeal with a side of Hubig's New Orleans Style Pies. Good effort, Phil! We hope it worked. But we suspect that pathos was the general effect. But maybe we're wrong! We hope so! The pies probably didn't hurt! Here's what Phil has to say about the pies: "Hubig's pies are super-sweet, super-lardy fried pies. You pop 'em in the microwave for about half a minute til their innards are molten, and they come out amazingly delicious. The sugary glaze makes at least three of my molars hurt every time I eat one." "Click" here to take a tour of the Hubig's pie factory. And if that's not enough factory action to suit you, don't forget the corncob pipe factory and the marble factory. Happy Mardi Gras!
Posted by Jack Pendarvis at 8:06 PM