Welcome once again to "Oatmeal Tips," by far our most useful regular feature. "Dear Oatmeal Tips," writes Phil Oppenheim, "You’ll be interested to know that I’ve found a recipe for our humble oatmeal that manages to neutralize virtually all of its nutritional benefits. [Horrors! - ed.] I think it looks like something I might be eating on my birthday..." Phil is missing the point of oatmeal, of course. But now may be a good time to mention that Phil's little boy likes to read and reread a kid's version of MOBY-DICK. He runs around the house shouting, "Call me Ishmael!" and giggling. Phil's son, I mean. Although it wouldn't surprise me to hear that Phil runs around the house giggling for some other reason. Phil's son also says things like, "Moby-Dick doesn't want to get caught!" He's like a li'l grad student, but expresses himself more clearly. And speaking of MOBY-DICK, I saw over on therumpus.net that there's a guy engaged in writing a different song about every chapter of MOBY-DICK. You can go to his "web" site and listen to all the songs about MOBY-DICK he has written so far! I like that therumpus.net. I believe I will include it in my list of "friendly 'links'" over there to the side. Below, what Phil calls "oatmeal" - the beautiful yet dubious result of the recipe in question. On the other hand, can the man who introduced us to kasha really steer us wrong? We think not! Have oatmeal tips? Don't be shy! Send them to "Oatmeal Tips" c/o "Writer" Oxford, MS 38655. 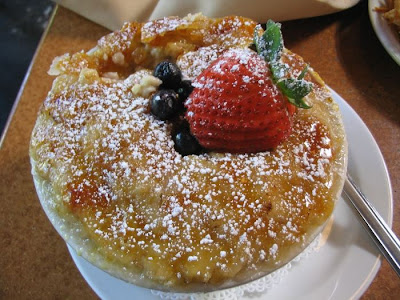 Posted by Jack Pendarvis at 3:35 PM