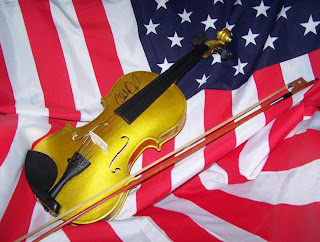 Our in-depth investigation into the kithara continues apace. My friend from Hubcap City writes in: "Your search for the meaning of cither reached the right conclusion. Cither is the word in my translation of The Republic. I’m reading the Bloom translation. Apparently, Plato’s aversion to certain kinds of instruments is old news and goes back to a musical duel between Apollo and Marsyas (start humming 'Devil Went Down to Georgia' here). Marsyas was a satyr and played flute, the most reprehensible of all instruments in The Republic. Apollo played the cither. I don’t know the specifics about the smackdown, other than that the Muses deemed Apollo the winner. How did Apollo celebrate his victory? He skinned Marsyas alive (a far worse fate than the invitation to 'come on back if you ever want to try again' that the Devil received in the Daniels song). Although Plato would have loathed Daniels' instruments—both the guitar and fiddle are many stringed and capable of playing all modes—he would have applauded more than a few of the self-described Redneck Fiddlin’ Man’s lyrics. The chorus to 'This Ain’t a Rag, It’s a Flag,' is packed with the militaristic bravado Plato sought to teach the future leaders of his ideal nation: 'This ain't no rag, it's a flag / Old Glory red, white and blue / The stars and the stripes when it comes to a fight / We can do what we have to do / Our people stand proud / The American crowd/ is faithful, loyal and tough / We're good as the best and better than the rest / And you're gonna find out soon enough.' So, there you have it, the ideal citizen of Plato’s Republic is a cither playing Charlie Daniels!" So says our friend from Hubcap City.
Posted by Jack Pendarvis at 11:43 AM