I Was Thinking About Superman Villains 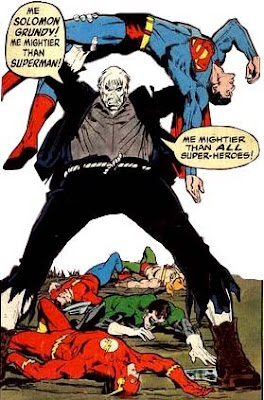 I think I can use Bizarro Superman to debunk handily what Jonathan Rosenbaum has called the "irrational denial that [Jerry Lewis] was all that popular to begin with." This is what I do with my life! In the previous "post" I "linked" to a comic book cover on which, if you look closely, a Bizarro Superman is proclaiming, "Ha! What Halloween fun we have with my super-dog, Krypto! Us Bizarros scare him with horrible masks of Earth people like President Kennedy, Marilyn Monroe and Jerry Lewis!" Now, if you know anything about Bizarro Supermen, they are the opposite of regular people. They say "hello!" when they mean "goodbye!" for example. They think ugly things are pretty and pretty things are ugly. Get it? So what we are clearly seeing here is that the desirable physical beauty of Jerry Lewis easily rivaled that of JFK and Marilyn. All right. That's settled. You know, the other day I was thinking about the Superman villain Solomon Grundy for some reason. The way I remembered him from childhood, Solomon Grundy wore a raggedy vest or something, exhibited great strength, had a problem speaking proper English, and was monochromatic. "How very like the Incredible Hulk!" I reflected as I lounged about in my cork-lined boudoir like Marcel Proust. Solomon Grundy and the Hulk would really get along, and they both need a pal. We need to get these two together! In my mind's eye, I even saw Solomon Grundy in purple, the Hulk's favorite sartorial choice, though the old pictures of Mr. Grundy on the "internet" show him to favor black or gray - perhaps misprinted as purplish in the cheap comic books of my lost youth? (That's right, blame it on the ink, old man.) He did dress in rags, though that has changed in our strange modern times, according to "Blog" Buddy and comic book villain expert Justin Riley, who reports: "Nowadays, SG rocks a tailored black suit straight from the ill-fated swing revival of the 1990s." I trust Mr. Riley in this matter as his most recent "blog" contribution was about the fashion sense of the Lizard. I think I will put up a picture of Solomon Grundy for you, in defiance of my self-imposed "rules." A quick glance at the "internet" tells me I am the ten-millionth person to waste his life "blogging" about the compatibility of the Hulk and Solomon Grundy but don't forget, there is nothing new on the "internet," as Solomon (NOT Grundy!) told us.
Posted by Jack Pendarvis at 9:35 AM