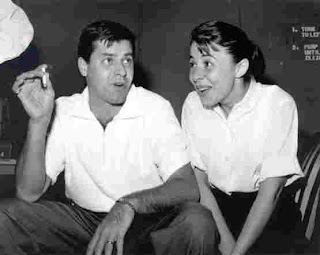 Welcome once again to "Frasier, Briefly," your source for all the hottest and latest news about reruns of Frasier. Last night it was the one in which Diane comes to town for what the capsule description called "a surprise visit." Was I going to miss that? No way! I even switched from David Letterman, who was throwing a 55-gallon drum's worth of Super Balls off the top of his building. But there was a problem. "Blog" Buddy Kelly Hogan - ironically (maybe! What does "ironically" mean?) the world's biggest Frasier fan - was to appear simultaneously on the Jay Leno program. I comforted - yet tortured! - myself with the thought that musicians are usually the last persons to appear on any talk show, crammed into the final minutes with as little time to spare as possible. But just in case, I set the dvr to record Leno, a man I do not find generally entertaining - nothing against him! It is my own fault. But why are musicians always the last, forced to squeeze themselves into whatever remaining time? And why aren't they ever interviewed? People might enjoy hearing about the craft that goes into the popular rock and roll music of the present day youth! Just as I thought and feared, the dvr was unnecessary. Hogan came on in the last possible moments of the show and blew everybody off the stage in sweet and utter revenge. Beforehand, Leno announced her name! Did I feel the same frisson as when Letterman announced her name? Perhaps not. But there she was on THE TONIGHT SHOW, getting her name announced! It is too bad Johnny Carson is no longer with us, but still. Anyway, a theater group in Seattle was putting on Diane's play, a thinly veiled and humorously self-serving version of her days at Cheers. Sam was called Dan, Norm was called Ned, etc. As far as the relationship of Frasier and Diane goes, a modicum of closure was achieved, you will be happy to hear. It was all very "meta"! For example, after their parting scene, Frasier accidentally uses the false stage door representing the old CHEERS door to make his dramatic exit. He felt pretty sheepish after that, as you might imagine! That door led nowhere, in a bleak commentary on the possibility of love in the modern world. In other Frasier news, Frasier is on Broadway now and getting wonderful reviews, so good for Frasier. (Note that the review contains the word "bespoke," the hot new word in the New York Times.)
Posted by Jack Pendarvis at 7:39 AM