And Woden Lost His Beer 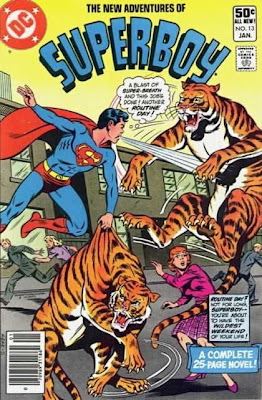 Forget what I said earlier. Things have taken a positively giddy turn in CHRISTIANITY: THE FIRST THREE THOUSAND YEARS by Diarmaid MacCulloch. I am sure you recall Apollonius of Tyana, who could see really far like Superman. In the "post" about Apollonius of Tyana, I happened to mention that one of Superman's other powers is blowing really hard (look, here he is as a boy, blowing on a tiger). Well, that brings us to the Irish missionary Columbanus, who was running around near Switzerland in the 580s or so, spreading the word. According to legend, he saw these dudes about to sacrifice a barrel of beer to "their fierce god Woden." MacCulloch goes on, "Columbanus had nothing against alcohol, but he did not want to see all that beer wasted on a false god, so he made a preemptive strike by blowing hard on the giant barrel. It exploded and Woden lost his beer."
Posted by Jack Pendarvis at 11:56 AM