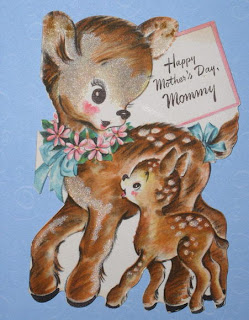 The first thing is actually serious: that terrible oil spill. Mom says the word around town is that it's still a few days away from Bayou La Batre. I will keep you posted if I hear anything about ways to help with the cleanup. Friend of the "blog" Michelle Richmond has been "blogging" about the oil spill, and its impact on the Alabama Gulf Coast, for the San Francisco Chronicle, so you should keep up with that. Now for the lighter side of Mom news. Mom saw herself on ENTERTAINMENT TONIGHT! That's how she found out about the videotape of Larry King and his wife and Larry King's wife "lover" in which Mom is standing in the background looking presciently cross about the whole deal. Mom is quite put out with whomever sold that videotape, because he or she was invited to Larry King's kid's birthday party, and Mom considers it a cruel breach of etiquette (and she is right) to "betray a child" (as she put it) in that way. Mom says she snapped one photo at the birthday party, taking care that Larry King and his wife were far in the distance (though in the frame), and she felt exploitative even doing that. Mother's Day is coming up, isn't it? So I will skip the "random picture rule" and find some sort of appropriately Mom-ish illustration.
Posted by Jack Pendarvis at 3:24 PM