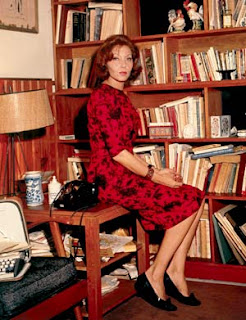 Today I was mooning around Square Books, which is something I do just about every day. I don't usually put books back - except for that one manifesto that one time - but today I put back two books! First I picked up a book about mules. I believe it was called THE BOOK OF MULES. I carried it around for a long time, thinking about how much I need a book about mules. But then I put it back. After that, I found SELECTED CRONICAS (I think!) by the fascinating Brazilian writer Clarice Lispector (pictured). I leafed through it and started to think, "Hey, this is like Clarice Lispector's 'blog," except 'blogs' didn't exist!" You know, stuff like, "I saw an interesting bug today!" except put differently. And part of me really wanted it because of that and another part of me really didn't want it because of that, and for today the not-wanting part of me won, but I have a feeling this battle isn't over yet. I was happy to notice during my ramble through the shelves that nyrb has put out NIGHTMARE ALLEY in its own individual paperback. I didn't buy that either because I already have it in that big, fat, expensive (and lovely) Library of America edition with some other stuff, but everyone else should take this opportunity to snatch up NIGHTMARE ALLEY in its newly handy and portable form. NIGHTMARE ALLEY is the greatest!
Posted by Jack Pendarvis at 3:35 PM