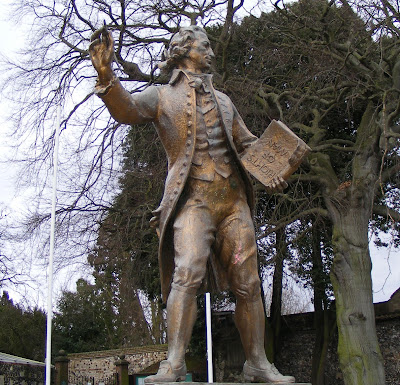 Thomas Paine's funeral was sad and almost nobody came. No eulogy, no statesmen. His housekeeper's remembrance of it is quite moving. But you won't see that here! The "blog" is not sad! How many times do I have to tell you? Nor is it political. The morosely righteous political "blogger" who could fix the world for us if only we would allow it is the most presumptuous and dullest of creatures living on the "internet." Anyway, I was reading Mr. Paine's COMMON SENSE this weekend, and it's very witty. It made me think (not due to any similarity of style, because there was none) about the angry little white man who waggled his finger at me through the TV screen over three years ago. I had no idea who he was! But three years is forever on television! Now everyone knows my waggling friend! He has a famous show each weekday afternoon where he throws blubbering tantrums and talks about the founding fathers - often simultaneously! He also loves the past. I lived in the past, and I don't recall grown men - either of my grandfathers, for example - behaving in such an outré fashion, so it's odd that he loves the past so much - were he to achieve his dream of traveling there, I cannot imagine he would find it welcoming. Is that how your grandfather comported himself in public? I highly doubt it! And as I was reading COMMON SENSE I was thinking about how much this gentleman on TV and Thomas Paine would hate each other, maybe. I can't imagine that John Adams would have had much use for the TV man either. But entertainment comes in all forms! That's fine! And he seems to assume that John Adams would love him! And maybe he would! It makes him feel better about stuff! Great! We are all just looking for some relief! That's the way it is! Let me stress that I cannot predict how John Adams would feel if we managed to bring him back to life. That's where my friend and I differ! So be it! Okay, I just have to tell you that the French housekeeper, Madame de Bonneville, stood at one end of the grave and asked her son to stand at the other. Then, as she later recalled, "Looking round me, and beholding the small group of spectators, I exclaimed, as the earth was tumbled into the grave, 'Oh! Mr. Paine! My son stands here as testimony of the gratitude of America, and I, for France!'"
Posted by Jack Pendarvis at 7:49 AM