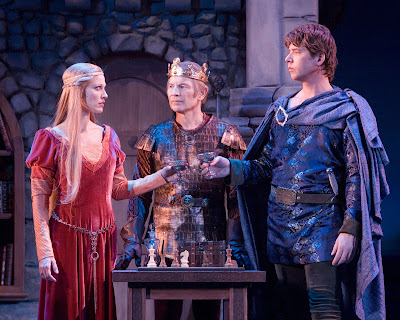 Caroline's memory of the evening with Michael York differs in one small detail from mine: as she recalls it, Dr. Theresa and friend "told Michael York that they had the leg back at the hotel room, which was close by. Oh, yes. Good times. And I picked up that snazzy green polyblend leisure suit that I wore when [our band] played the Red Light Cafe for the first time. Don't know what happened to the leg or the suit, both lived in my house for a long time." By coincidence, Heather (guitar) just sent me some video I probably shouldn't show you. It is our band singing a little sea chantey in 1997. Turns out a sea chantey - this one, anyway - consists of the same few notes repeated over and over and over and over and over. Also, the accordion seems weirdly out of tune. I didn't know it was possible to make an accordion sound out of tune, but somehow I manage it! Anyway, I think :15-:33 sounds very nice. Plus Barry B. has some nice drum fills near the end! And if you skip ahead to near the end (not near enough! 1:45) you can see Caroline! She is not wearing the green polyblend leisure suit (this is a different show) but she IS wearing overalls and happily beating her conga drums. Also please enjoy a panning shot of the audience sitting in respectful silence like the longest church service of the year. You know, other band members sang lead on plenty of songs. Why do these clips keep featuring my dubious pipes? I suppose it has something to do with karma. Oh, and THIS JUST IN! Even as I typed, Caroline came through with a version of the Michael York story that squares both of our memories. Says Caroline, "I think they might have optimistically gone back and put [the leg] in the coatroom after, so the next time they saw him they said, Look we have it here! but [Michael York] was well creeped out by this point." Dr. Theresa confirms this version of the story. (Pictured, Michael York, center, in a staged reenactment of the encounter.)

Posted by Jack Pendarvis at 8:46 AM