Suddenly I Was Thinking of Michael York 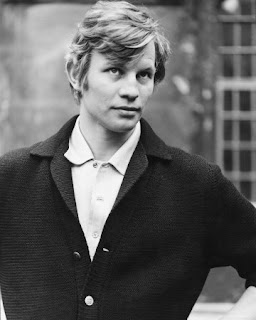 All of a sudden just now for an unrelated reason - almost no reason! - I was thinking of the actor Michael York (pictured), and then I remembered the time that Dr. Theresa met Michael York! I never told you about that, did I? Dr. Theresa (then without a doctorate) and a friend of hers were in South Carolina, shooting an "independent" short film about a man who fell in love with a mannequin leg (I am oversimplifying - and actually completely misrepresenting - the plot). Then they ran into Michael York! It all started out very charmingly. Michael York seemed interested in their film! Theresa and her friend were like, "There is a scene where a guy has drinks with the leg." Then Michael York very sophisticatedly mentioned the Rohmer film CLAIRE'S KNEE, and everyone present laughed in a sophisticated manner. Then Theresa and her friend said, "Hey, Michael York, if you're not too busy, you could be the man who has drinks with the leg!" Then Michael York was very polite but said, "Well, you know, my schedule is tight..." Then Theresa's friend said, "We have the leg right here in a coatroom! We could shoot it right now!" (This is a true story.) And by the way, they had sort of cornered Michael York on a staircase. He declined nonetheless! In the meantime, Caroline Young (who was dating Theresa's friend at the time) and I were in a cigar and wine bar in another part of South Carolina, completely ignorant of the fact that our respective loved ones had run into Michael York. No, Caroline and I were busy yelling at each other in a crazed argument about Elvis Presley, because that is the kind of thing we used to do for kicks. Later we laughed about it. We used to be so serious half the time! The next day, I performed the "Michael York" role as a poor substitute and had drinks with the leg in a lovely courtyard, but Theresa's friend had the wrong lens on the camera and when the footage was viewed no one could make out what was happening. It was all extreme close-ups! But as I recall, we had some good fish before leaving town.
Posted by Jack Pendarvis at 9:36 PM