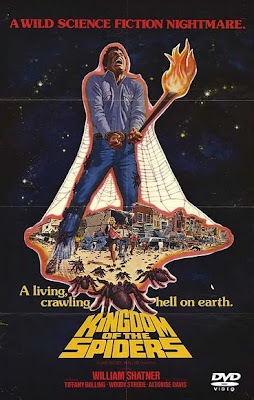 I was watching the beginning of a movie called KINGDOM OF THE SPIDERS. It starts with this cow in this pasture. Then this cow looks up, right at the camera, in a very particular way, as if to say, "Uh, did you just hear something weird?" I mean, this cow nailed it! This cow got across exactly the message the filmmakers wanted. So I got nervous. Like, "Something bad is going to happen to this cow." Like, "The spiders are going to get it!" But you don't see what happened to the cow, at least not right away. There are lots of expressionistic shots suggesting that something bad is in the process of happening to the cow, but it's kind of vague. That sequence ends with an ominous freeze frame on the cow's luxurious eyelashes. I was impressed with what this cow was putting out there as far as acting. That's all I know because then I had to get up to do something. It's still on, though, KINGDOM OF THE SPIDERS is. I'll get back in there in a minute if I can, and keep you posted.
Posted by Jack Pendarvis at 12:41 PM