"Yeah, You Gotta Make That Scene." 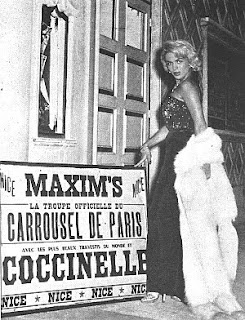 If you want mass market paperbacks by Bob Hope, and you do, there is no better source, apparently, than the vast network of Michigan flea markets, from one of which - ONCE AGAIN! - Megan Abbott has been kind enough to send me a nice surprise. This time it's a little number called I OWE RUSSIA $1200. In the VERY FIRST FULL PARAGRAPH Frank Sinatra offers to take Mrs. Khrushchev to Disneyland like so: "Yeah, you gotta make that scene." AND Bob refers to her as "Mrs. K." AND she refers to Khrushchev as "Nickie." So - and nothing against our book club - it's ALREADY demonstrably better than our book club selection. So then I flip open the book at random and find Bob entranced and fascinated by Coccinelle, the transgender entertainer (pictured). The first time he spots her, Bob is sharing a table with Dean Martin in a Paris bar! And she walks by and winks at him! When he finds out the "truth," he says, "I wish I could have another talk with my father." That old "rake," as Megan has aptly called him! Then there's a full-page picture of Coccinelle and Bob Hope on the set of PARIS HOLIDAY. Really, could any book be any better? I tried to find a decent picture of Bob and Coccinelle on the "internet," but all I saw was a thumbnail picture, and not nearly as nice as the one in the book, though it seems to have been snapped in the same general location. I love literature! (Above, Coccinelle. Below, Bob Hope dancing with Anita Ekberg - not Coccinelle, sadly - on the aforementioned set of PARIS HOLIDAY.) 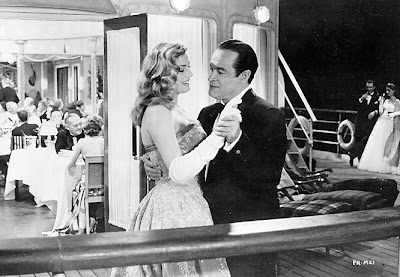 Posted by Jack Pendarvis at 1:45 PM