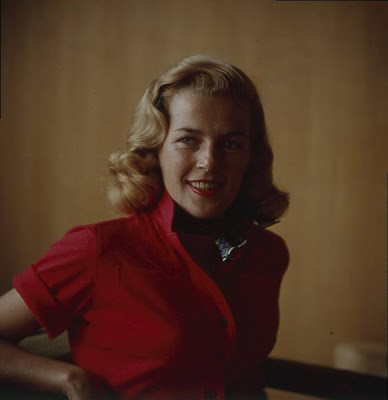 More thoughts on MONEY FROM HOME 1) Yes, he does ride a horse backwards, but at no point does Jerry Lewis brandish a bloody knife - or even come close to brandishing a bloody knife! - as seen in the bizarre Belgian movie poster. 2) I want a suit like Dean Martin wears at the beginning of the movie. It's blue pinstripe. Also, a luxurious, rich indigo shirt. I asked Dr. Theresa to name the color of the tie, and she said "golden." I don't know, it may be paler. Plus a very nice brown hat. 3) Jerry Lewis's blue jacket is not too shabby, either. Light and dark blue, alternating, with a bright yellow (almost saffron?) ascot. 4) Who is Marjie Millar (pictured)? I have no idea. A cutie pie, but other than that I have no idea. At one point she wears a white-and-green dress with white gloves and white beaded purse that would perfectly suit Dr. Theresa. We discussed it.
Posted by Jack Pendarvis at 5:21 PM