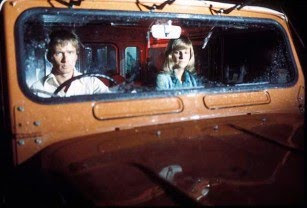 Had a nice note from the man who also loves the cow's performance in KINGDOM OF THE SPIDERS. I dropped him a line yesterday, because I didn't want him to think I was copying him! He didn't mind. In fact, he was kind enough to recommend another horror movie with a fine (though brief) animal performance: LONG WEEKEND (1978). Here's his description of the uncredited Labrador known as "Cricket" in the film: "As they discuss how they can just leave him outside with one big bowl of food for the whole weekend, he watches them not only as though he knows what they’re talking about, but as though he’s MORTIFIED that they would discuss it so openly as if he wasn’t even there." You may read his entire review here. WARNING: He uses "racy language"! But don't worry! He is very nice and not one of the crazy people on the "internet." I have never seen LONG WEEKEND, but the "internet" tells me this is a picture from it. Looks like one of these people might be getting ready to say, "Wow, it sure has been a... long weekend." Roll credits.
Posted by Jack Pendarvis at 2:42 PM