Wamp There It Is 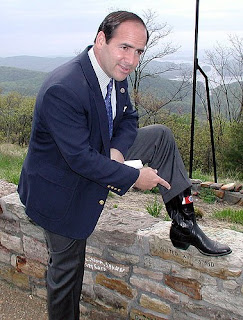 We live near Tennessee, which has some primaries coming up, so late at night there are lots of political ads on the television set. One guy pops on the screen and says, the first words out of his mouth, "I'm Zach Wamp." Well, it just makes you giggle! Not in a mean way. All of a sudden out of nowhere his big head fills up the screen (his head is not unusually big, it's just the "in your face" framing of the shot) and he says "I'm Zach Wamp," and you just have to laugh, that's all. It's pronounced kind of like "Whomp." I saw him for the first time tonight. In his commercial he's smiling but seems upset about something. Let's say his mouth is smiling but his eyebrows are concerned. The "blog" is not endorsing Zach Wamp. The "blog" just thinks his name is fun to say, though not in a Jerry Lewis way, because it's not long enough - two curt syllables. Then there's this other guy, this other Tennessee politician - I can't think of his name because it's not Zach Wamp - whose slogan is "Plow Congress." Maybe there was an earlier commercial explaining what he means by that, but in the one I saw tonight, it's just there on the screen, without comment. Back to Zach Wamp for a minute. One thing Zach Wamp says in his commercial is "Here's my heart." Look, I found a picture of Zach Wamp pointing at something on his boot, I guess. I have no context. I have no context for anything. And though it is hard to make out in this small version of the picture, he has planted his foot on a brick engraved with the slogan UNITED WE STAND.
Posted by Jack Pendarvis at 9:20 PM