Dares to Ask the Question 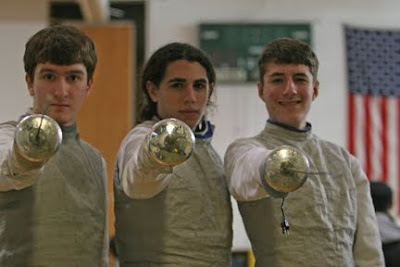 The NBIL sends along an article that dares to ask the question, "Could there be lights not only possessed of some sort of intelligence but which are capable of forming a unique rapport with a person and even delivering painful stings when they so choose?" You know what? I'm going to stop calling him the NBIL. Nobody even remembers what it stands for anymore! His name is David! Let's call him that. I did a "google" and it turns out there are lots of other people and things called NBIL. Pictured, for example, is a fencing team from the North Bergen Interscholastic Athletic League, which - according to wikipedia - sometimes leaves out the "A" from its abbreviation, even, apparently, in its code of conduct, which states, "The NBIL encourages parents and spectators to support good sportsmanship and to be positive role models to student athletes." Sounds like something every NBIL can get behind! Of course, there are also lots of Davids.
Posted by Jack Pendarvis at 3:57 PM