Return of the Enigmatic Nedra 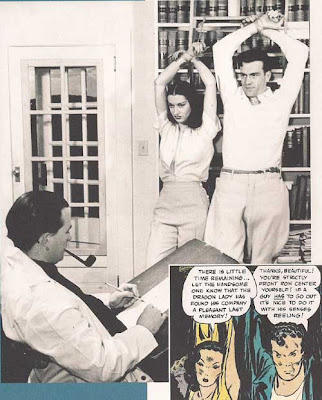 I received a very nice note via facebook from one Liz Keith, who was interested to see that I had "blogged" a couple of years ago about her second cousin Nedra Harrison. Do you remember Nedra Harrison? She was the model, aviatrix, scuba diver and renowned pathologist (to name a few of her accomplishments) so very modest that there's very little about her on the "internet." Says Ms. Keith, "I met her several times when she came to Georgia to visit. She was legendary in Tifton. All the old men remembered her. They remembered that she was the first woman to wear trousers here. They all thought she was so beautiful, but I think they were afraid to approach her... She was born Florence Harrison, but the family called her Kewpie." So that's just a little more information about an object of "blog" fascination, the enigmatic Nedra Harrison. (A quick glance tells me there still isn't much about Nedra Harrison on the "internet," but I did find one more image [above] than there was before [there were almost none]: it's Nedra modeling for the legendary cartoonist Milton Caniff... the same picture I stumbled across in a book, the caption of which first alerted me to her story.)
Posted by Jack Pendarvis at 3:37 PM