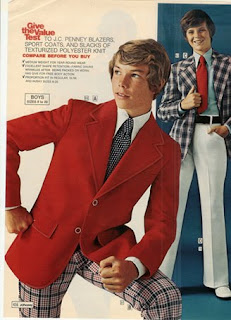 I was at the movies yesterday, and you know how they show regular commercials before movies in our strange modern times? I was surprised to learn - though I shouldn't have been - that with a completely straight face they still make that commercial, you know the one: the one where there is an "adult" with neatly combed hair and a suit and glasses, and he is utterly befuddled by the "hep" stuff some "cool kids" are throwing down, such as wearing cool hats and prancing about with blatant disregard for authority. And he, the "adult," puts his ear to the wall and smushes his face up against a small window trying in vain to figure out what these antiestablishment type kids are up to (spoiler alert - turns out they are modeling clothes from JC Penney!), and his demeanor becomes increasingly frazzled because he is so uptight. Yes, they are still making that commercial. Hey, wow, look, I just found a press release with the headline, "JCPenney's 'New Look. New Year. Who Knew!' Back-to-School Campaign Features Cutting Edge, Creative Marketing Aimed at Teens" and it has this line in it: "'Personalization and self-expression are important to teens and they want their look to reflect their unique personalities and style. And for teens, there is no better time to put their best fashion forward than Back-to-School,' said Mike Boylson, executive vice president and chief marketing officer for JCPenney." We could hardly hope for a more clear-cut statement of intent regarding repressive desublimation. (In fact, I am thrilled to report that the press release's Orwellian subhead reads "Campaign Encourages Teens to Take Control.") Ah, heavenly. This takes me back to the halcyon days of the Hawaiian Punch FAQ.
Posted by Jack Pendarvis at 8:25 AM