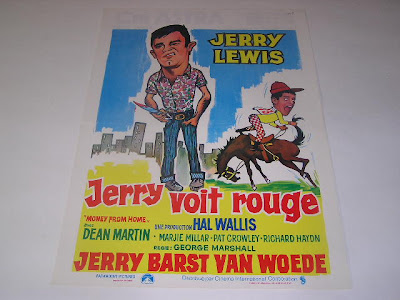 There is a Jerry Lewis reference in today's New York Times. As you know, such references have been scarce lately, which has caused me no end of worry. Manohla Dargis is still missing from the Arts section FOR REASONS NO ONE WILL EXPLAIN DESPITE MY HEARTRENDING CRIES, so it falls to Lonesome Dave Kehr once again to bring a little Jerry to our lives. But pay attention: what he is really talking about is ABSENCE OF JERRY. Will the indignities never end? In Kehr's report on an upcoming Film Forum program of 3-D movies from the 1950s, he mentions in passing that the Martin and Lewis vehicle MONEY FROM HOME was made in 3-D. The soul tingles! But then comes Kehr's parenthetical caveat: "(unavailable, alas)." Alas indeed! A truer alas was never sighed. The programmer has managed to dig up something called THE STRANGER WORE A GUN, which features (in Kehr's words) "a character squirting tobacco juice into the auditorium" but NO DEAN AND JERRY. Today there is a Jerry-sized hole in my heart. Look, I will be the first to admit I have said some things that were less than kind about MONEY FROM HOME in the past. But the chance to see it the way it was meant to be seen... gone forever! WHY? If you "click" on the previous "link" you will see - and this is for real, 100%! - that the CIA had a hand in editing MONEY FROM HOME. No joke! A scene was removed by an "operative" who was "planted... inside Paramount Pictures." And I noticed for the first time just now that the article revealing that fact was written by Terry Teachout - an unimpeachable source! - for COMMENTARY magazine. AND WHY does this Belgian movie poster for MONEY FROM HOME feature TWO JERRYS and NO DEAN? And why is one of the JERRYS HOLDING A BLOODY KNIFE? Once again we are forced to conclude that there is more to this story than meets the eye. DUNH DUNH DUNH!
Posted by Jack Pendarvis at 8:10 AM