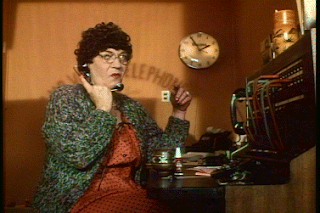 KINGDOM OF THE SPIDERS is still on. I had to come see what would happen if I did a "Google Image Search" for "Kingdom of the Spiders Operator." And just like that, there she is! Not only that, but on the "web" site where I found the picture, the "blogger" ALSO notes the awesome acting abilities of the little cow in the pasture, just as I did in my previous "post," saying, and I quote, "So there’s this adorable cow in a field, who gives some brilliantly terrified reaction shots." Then he goes on, "Actually all the animals in this film deserve some kind of ensemble acting award." WHICH IS SOMETHING ELSE I WAS JUST ABOUT TO SAY. Because there is a horse that's all, "Don't you people see what's happening? That spider is about to get that little girl!" But because he is a horse, he has to express it with his big, gentle eyes. And he does a fantastic job, the horse does. I mean, you really feel what that horse is thinking! He (she?) is like the Marlon Brando of horses. So maybe you thought I was exaggerating about the cow, but see? It is something people notice about KINGDOM OF THE SPIDERS. In fact, the subtitle of that other article is "Riveting Dramatic Acting By Farm Animals." The human actors have to say things like, "That venom we sent to the lab is five times more powerful than normal!" That same character tries to convince the authorities to release rats to defeat the spiders! I am not kidding! I must say that this picture of the operator is something of a disappointment, as it does not fully get across the INLAND EMPIRE feeling of the wall color where she works, or the strange, somber glow of the clock.
Posted by Jack Pendarvis at 1:34 PM