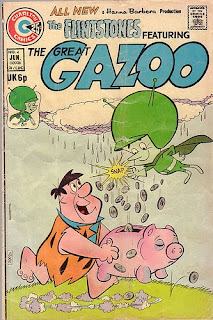 Scott Phillips is the latest person to cast doubt upon the existence of McNeil! I don't know, but I think it is because all the other members of our book club are on facebook, but McNeil is not. This is what counts as existence in our troubled times! They all laughed at Fred Flinstone for believing in the Great Gazoo, too. I showed Mr. Phillips the pictures of McNeil's bruised arm and McNeil just before he learned that he had swine flu. And I forgot the time McNeil came down here to read one of his stories at a Kitty Snacks party and met several real-life people such as the girl who eats dry oatmeal (who also used to doubt McNeil's existence) and the smart student with whom I oft discuss Little Lulu and eefing. (The "student" is now an ex-student, and of course "girl" is condescending, but I hope you will agree that "the girl who eats dry oatmeal" has more of a ring to it than "the young woman who eats dry oatmeal." But maybe I should change it. Yes, I should.)
Posted by Jack Pendarvis at 7:40 AM