The Planet Without Entertainment 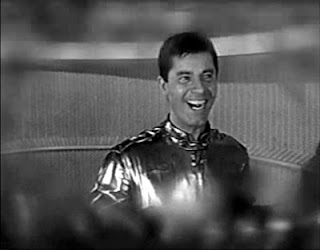 I don't think I'm explaining this Jerry Lewis situation very clearly. Let's look at it using our powers of logic! 1) McNeil sent me a clip of Dan Ackroyd talking about his belief in UFOs. 2) The clip came from CNN. 3) The clip was on youtube. 4) On youtube, before you press play, the clip is represented by a single frame extracted from THE EXACT MIDDLE of the clip. 5) In THE EXACT MIDDLE OF THE CLIP, so that it is frozen for the world to examine on youtube, the CNN "news crawl" is reporting the breaking news that Jerry Lewis has taken over "leadership of the Friars Club." Okay! Are you with me so far? Now here's where logic comes in! What do space aliens usually say after landing, according to popular movies, cartoons, and skits? That's right: "Take me to your leader." Can it be mere coincidence that Jerry Lewis's name (in conjunction with his role as "LEADER") is not only embedded in this clip proving the existence of UFOs, but embedded in such a way as to call special attention to itself? I think not! Our only logical conclusion: it is a MESSAGE FROM BEYOND or maybe even a WARNING from a sympathetic life form that THE ALIENS ARE COMING FOR JERRY LEWIS! If they just want to meet him, fine. Who wouldn't? But what if they come from a planet without entertainment, and they try to take him away to set up some sort of studio system up there? Or what if they want to put him on display in a Vonnegutian space zoo to caper about for them? No way! That's where the people of Earth must STAND TOGETHER and DRAW THE LINE! Hey, wait a minute! Wait just a gosh darn minute! Speaking of Vonnegut, Jerry Lewis starred in the Vonnegut adaptation SLAPSTICK (OF ANOTHER KIND) as one of a pair of twins who are (in the words of imdb) "really an alien brother-and-sister team implanted in [their mother] to solve the world's problems." And he also played an alien in VISIT TO A SMALL PLANET. All the pieces are coming together! Be prepared! Be watchful! This could be even more sinister than I originally thought. Could it be... they're coming BACK for him?
Posted by Jack Pendarvis at 6:08 AM