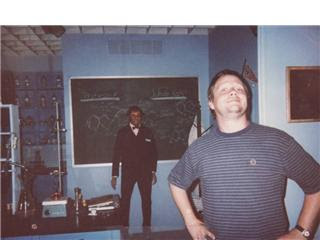 Here is a picture of me as I looked 12 years ago, standing in front of a wax statue of Jerry Lewis as he appeared in THE NUTTY PROFESSOR. So you can see that my infatuation with Mr. Lewis, about whom I ramble constantly, is no upstart of a hobbyhorse. This picture comes to me from my ex-boss Lisa. She had it taped to the filing cabinet in her office for many a year, and it is nice to see that she held on to it. The person who took the picture is none other than Mark Osborne. O delicious irony! Mark, of course, is the person with whom I have had a friendly debate about the virtues of Jerry Lewis. We were in California at the time of the photo. I seem to recall that we had to drive a good way out of Los Angeles to get to the wax museum. I seem to recall that it was across the street from a Medieval Times theme restaurant. I believe I took one of Mark pretending to be amused by a wax figure of Whoopi Goldberg in SISTER ACT, but that photo is lost to the mists of time.
Posted by Jack Pendarvis at 3:46 PM