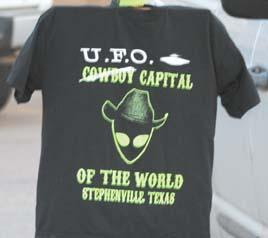 McNeil has been enjoying recent accounts of a UFO flying around Texas. (The Aquaman "blog" has touched on this story as well.) McNeil is particularly taken with some cell phone video. You can see it on CNN.com, but I'm not going to "link" to it because they make you sit through an antacid commercial or something before you get to the UFO, and you know how I feel about "The Man" telling you what you can and can't do! It's not so much the video that McNeil likes ("It just looks like a headlight," he says) as the voices of the guys in the background. "They're drunk," claims McNeil. We can neither confirm nor deny McNeil's assessment of their state. We can, however, report that one of them says "Close encounters for the third kind!" (sic) while the other says, "Woowoowoowoowoowoowoowoo."
Posted by Jack Pendarvis at 2:24 PM