You Can Always Count on Phil 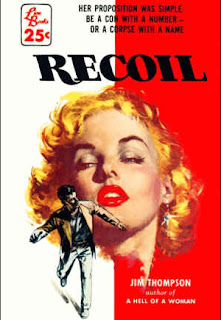 Phil Oppenheim has done it again! "The Sage of Atlanta" (a nickname I just made up for him this very second) sends an amazing "link" to the web site of paperback cover artist R.A. Maguire (that's a sample of Mr. Maguire's work accompanying this "post"). Good old Phil! We feel sure that McNeil's worship of Phil has now evolved into something for which there is no word in our human languages. Phil also includes a kind note "correcting the record" on what I portrayed as my inability to dole out decent advice. Though he obviously has problems with Robert Walser, Phil would like everyone to know that he was very satisfied with my previous personal recommendations of THE THIRD POLICEMAN, the Sonny Rollins album WAY OUT WEST, and the film HIGHBALL. He may even start watching THE WIRE, he says! "I certainly don’t mind your 'readership' thinking that I’m some sort of ingrate or misanthrope or crank," Phil concludes, "but I thought it was incumbent upon me to set the record straight."
Posted by Jack Pendarvis at 6:08 PM