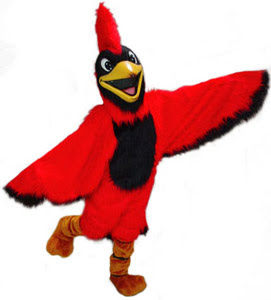 We love the bird correspondent! She is never stumped for tidbits! Here is what she says about our most recent inquiry: "Jack--Interesting you should bring up the rufous-sided towhee, which IS one of those birds that 'says' something, that being: 'Drink your tea' (or as I say, 'Drink yer tea'--to me the bird has a definite accent). Some others, which happen to have been discussed previously on this blog, include the cardinal ('What? Cheer, cheer, cheer') and the great-horned owl ('Who's awake? Me, too.'). The barred owl, by contrast, says 'Who cooks for you? Who cooks for you-all?' The white-throated sparrow, another common southern yard bird, says, 'Poor Sam Peabody Peabody Peabody.' It would help if I could sing all these for you... I have no idea who decides on the words, but they all sound quite appropriate. And of course that's in English. In other languages, words meant to imitate the sound an animal makes (like meow for cat, or cock-a-doodle-doo for rooster) are all different. In Spanish the rooster is kikiriki; in Dutch it's kukeliku." Thanks, B.C.! We seem to recall that our friend Caroline once informed us that in France, pigs say, "True! True!" But we can't recall whether they say the French word for true or if what the French hear when a pig speaks is a homonym for the English word "true." Perhaps Caroline will contact us and let us know.
Posted by Jack Pendarvis at 12:32 PM