Why I Read Faulkner 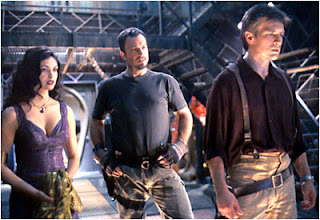 I hope you know by now how suggestible I am. I have mentioned as much on the "blog." I have revealed as much in interviews. I have strongly implied as much in first-person fictional narratives ("The Poet I Know," a story from my first collection) - though of course you should never confuse the narrator with the author. I now offer conclusive proof of my own suggestibility. A while back, you may recall, Theresa and I were watching the TV series FIREFLY. On FIREFLY, there are bad guys called "Reavers." And I was like, "That reminds me! I've never read THE REIVERS by William Faulkner." So the next time they mentioned "Reavers" on the show, I hit pause and walked up to Square Books and bought THE REIVERS and that's what I'm reading now. Unlike FIREFLY, the Faulkner book has nothing to do with cowboys in outer space ... SO FAR!
Posted by Jack Pendarvis at 1:57 PM