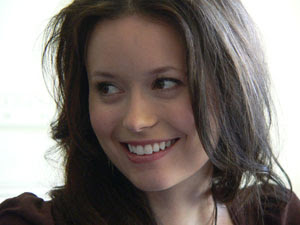 Hey, remember the Terminator? Well, he's back with all his buddies - in TV form, that is! Last Sunday, Theresa and I watched the new TV show all about the Terminator and his irrepressible antics. It proved to be so enjoyable that we're going to watch the second episode when it airs tonight. "I'll bet you're glad Summer Glau is in it," said Theresa, "so you can say her name like Jerry Lewis when you see it in the credits." To which I replied, "Yes!" As I have mentioned on the "blog" before, Summer Glau's name is one of the things I most enjoy saying in my famous Jerry Lewis voice. Theresa would also like to see the PBS production of Jane Austen's NORTHANGER ABBEY tonight, but only if it does not conflict with her Terminator show or, most especially, THE WIRE. Don't forget to watch THE WIRE! Oh, TV, your bounty is so great! Our eyes are filled to overflowing with your goodness. (Pictured, Glau.)
Posted by Jack Pendarvis at 10:54 AM