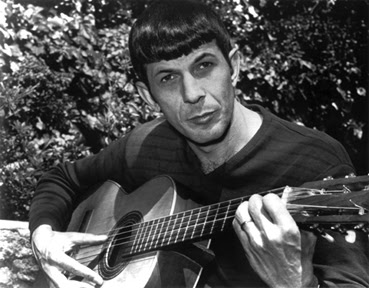 By coincidence, I have recently received two emails on the same subject - one from a stranger, another from a guy I haven't heard from since high school. The stranger has been mentioned on the "blog." He is the person who showed one of my undergrads the episode of STAR TREK in which Mr. Spock is feeling frisky, if you know what I mean, and I think you do. This person writes in to say that he reads my "confusing blog." He doesn't REALLY like it as much as some other, much better "blogs," but appreciates the fact that it is updated often. The guy I knew in high school says that he likes the "blog," at least the parts of it he CAN UNDERSTAND (my caps). So: is the "blog" really that confusing? Let me explain it. I like Jerry Lewis. I am trying to sell books by pretending to be a happy-go-lucky joe who just happens to enjoy "blogging." The end. Hope this clears everything up! The great thing about this "post" is that it gives me an excuse to pull out my good old picture of Mr. Spock playing his guitar.
Posted by Jack Pendarvis at 10:10 AM