Lives of the Mascots 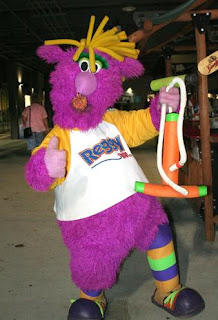 As I dug deeper into the Greensboro mascot situation [WHY??? - ed.] I noticed that the team was hyping an appearance by something called "Reggy the Purple Party Dude." Naturally, I became alarmed for the safety of the current grasshopper mascot, given the apparent fickleness on display and the propensity of Greensboro mascots to mysteriously disappear. But it turns out that Reggy is not a replacement. He was just making a guest appearance. I guess Reggy is sort of a wandering mascot. I imagine him like David Carradine in KUNG FU or Bill Bixby in THE INCREDIBLE HULK, moving from town to town helping beleaguered citizens and solving crimes. Reggy, it turns out, is "the official spokes character of the Mascot Hall of Fame," the "web" site of which refers to him as "one of the only talking mascots that we know of. This ability" (they go on) "brings some responsibility to share with the world the value of mascots in our lives!" (Exclamation point theirs.) PS: I loved the original caption of this photo, which read in part, "Reggy the Purple Party Dude and his 8-foot monkey were special guests at Tuesday night's Southern Illinois Miners game. The pair are from New England."
Posted by Jack Pendarvis at 9:14 AM