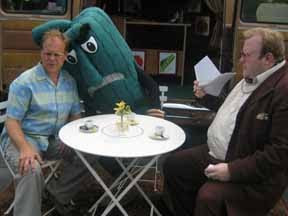 Okay! Here is one more new picture, because whenever our mascot discussion expands, I will allow a new picture of the mascot in question. Today I learned that a coworker went to a college at which the mascot was the fighting okra, which she described as "okra wearing boxing gloves." She promised to bring me a sticker for my accordion case. You can't see the boxing gloves in this picture: the fighting okra is hugging that guy from the Food Network and he doesn't look too happy about it, though neither does the okra for that matter. In other mascot news, Informant J2 got some junk mail today, including a catalog from Evergreen State, in which Speedy the Geoduck was depicted giving a "thumbs up." Informant J2 inquires, "What are the odds?"
Posted by Jack Pendarvis at 8:03 PM