Who Will Speak for the Mascots? 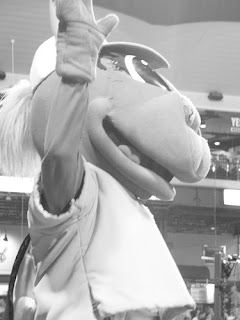 So how did the Greensboro Bats become the Grasshoppers? I found an article to answer your question. Oh, "internet," there is so much on you! There's this, for example: "Moore and his staff started with a list of 28 names several months ago. The suggestions ranged from Dingers, Dirtbags and Bricklayers to Tree Frogs and Pinesaps." But they finally decided on the grasshopper as a mascot because, among other reasons, "The grasshopper is a creature that, when picked up, spits a liquid most people call tobacco juice." Read the entire article here, on the "web" site for the Society for Sports Uniforms Research. But won't you WON'T read here is whatever happened to Gigi Grasshopper (pictured) who disappeared in 2008, after a mascot refurbishment, along with a sidekick named Timmy the Turtle. A press release I found states that "Gigi, who unfortunately is allergic to dogs, moved to Grasshoppers Island in Australia and became a local tour guide. Timmy decided to stay local and will be working with students around the Triad as a staff member of the Bryan Family YMCA." I smell a rat. Or a rat mascot. In any case, I'm not sure the story holds up. A grasshopper who's allergic to dogs? So she moves to Australia? What, there are no dogs in Australia? And where exactly is Grasshoppers Island? There's a suspiciously large mascot turnover in Greensboro, that's all I'm saying. What are the authorities hiding? The mascots aren't talking. Because they can't.
Posted by Jack Pendarvis at 8:15 AM