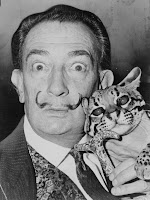 Time for another timely "Media Report!" But today we are discussing just one medium - youtube videos. So it is a "Medium Report." Like all good things, it stems from Phil and has Arnold Stang in it (see below). I like two things about that movie promo: 1) The announcer says that the film is in "glorious country color" but the promo is in black-and-white and doesn't give the appearance of gloriousness. 2) When the music stops near the end of the promo, everybody stops clapping in time and just stands there awkwardly in silence. The only thing I don't like is that Minnie Pearl is in the crowd shot and RECEIVES NO RECOGNITION! Someone else named Pearl does, but not Minnie (pictured). Phil also sends a "link" at which you can watch the entire two-hour premiere of Jerry Lewis's 1963 talk show in the form of youtube snippets, but you won't. I know you! I bounced from there to a youtube clip of Salvador Dali (also pictured and really, who's more surreal, Salvador or Minnie?) on a game show with future Match Game host Gene Rayburn. So that's a lot of youtube for you and sure, maybe I've grown too dependent on youtube, so sue me.

Posted by Jack Pendarvis at 6:45 AM