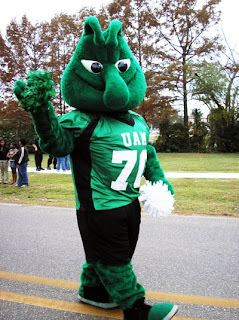 Yesterday's multi-"post" reflection on mascots, culminating in the introduction of Yggy the Tree, has inspired a flood of missives. Well, two. "Blog" Deputy Rhea says a friend of hers has a dog named Yggdrasil, Yggy for short. "He's big like a tree and thinks he's a human," she writes. Rhea included a picture but I couldn't see it or open it or whatever you call it. You know how computers are! They're crazy! Meanwhile, the enigmatic Sarah Marine sent a "link" to a commercial (for a search engine, I think) which incidentally claimed that the boll weevil who represents the University of Arkansas at Monticello is the "dumbest mascot." I will take this opportunity to defend the boll weevil! In the old folk song, he (or she, but a he in the versions I have heard) is a model of perseverance and a symbol of oppressed peoples who refuse to be broken or defeated by the harshest treatment. "The farmer took the boll weevil/ And threw him in the red hot sand/ The weevil said, 'It's mighty hot/ But I'm going to take it like a man,'" and so on. I may also mention that a town in my home state of Alabama has a statue dedicated to the boll weevil, because it forced people to rotate their crops, or something. I can't remember the story. Let's say that an unexpected consequence of the weevil infestation was to save the family farm, I guess. I'll find a "link" and we can all refresh our memories. 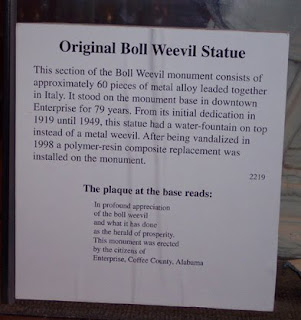 Posted by Jack Pendarvis at 6:00 AM