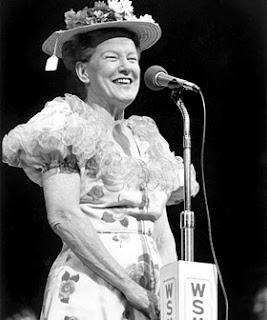 "Eerie coincidence," reports Dr. "M." She was making a scholarly sort of collage last week in her doctoral capacity and happened to include an image of Minnie Pearl. Her initial (and entirely independent, mind you) choice: THE EXACT SAME IMAGE OF MINNIE PEARL RECENTLY USED ON THE "BLOG"! "However," she writes in a postscript, "I decided not to use that one because I could not figure out what was going on with the coloring on her face. It looks like she has foundation on only half of her face or that she is/was suffering from some sort of skin condition. Or is it just me? Am I seeing things? In any case, I went with this black and white image instead though I hated to lose that shot of her with the chicken. Sigh. M"
Posted by Jack Pendarvis at 12:08 PM