The Case of the Violent Pierogi 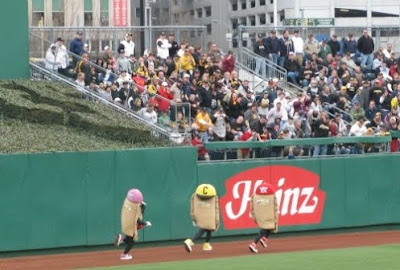 John Currence was over here today, telling a story about some mascots dressed as pierogi who chase one another around the ballpark and beat each other up! There was some discussion about whether this is a real thing from real life or something John Currence dreamed, but I don't believe we ever settled the matter. I'll look into it and let you know. It'll give me something to do tomorrow! Hooray, a reason to get out of bed! WELL DANG IT! I went to "google" pieorgi for you, in case you don't know what a pierogi is. I was going to "link" to a recipe or something. Because I care about you! AND THE FIRST THING THAT POPPED UP was a picture of these little pierogi running around. That's because one of them was recently fired for criticizing the Pittsburgh Pirates management on his facebook page, or something. I'd try harder to get the facts straight but I'm too upset because now there's no reason to get out of bed tomorrow. Thanks for nothing, "internet"!
Posted by Jack Pendarvis at 9:20 PM