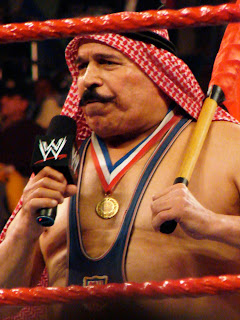 Welcome once again to "All-Star Entertainment Wrap-Up," your only place on the "internet" to find out what is happening in the world of entertainment celebrity stars! ITEM: Which chef and "Blog" Buddy was recently one of 12 picked to cook lunch with the First Lady of the United States of America? John Currence, that's who! According to a source (me!) who ran into Mr. Currence at City Grocery Bar, Mr. Currence's impression is that the First Lady is "very tall." ITEM: Guess who is not tall? That's right, famed professional wrestler the Iron Sheik! As Mr. Currence was leaving the studio of a Martha Stewart radio show, he ran into said Iron Sheik in the hallway, and was excited to shake his hand. Or should we say "sheik" his hand? Ha ha ha! Because that is just the kind of wordplay we enjoy on "All-Star Entertainment Wrap-Up." The Iron Sheik is not as tall as you think he is, sources confirm! Is the Iron Sheik wearing John Currence's James Beard Award medal in this photo? Sources can neither confirm nor deny. And that's the "long" and "short" of it from "All-Star Entertainment Wrap-Up." GET IT? Because the First Lady is tall and the Iron Sheik is not. ITEM: Guess who is following me on twitter? Yoko Ono! The real, verified Yoko Ono for really officially real. She is following like 314,000 people at last count, so I am trying to keep it in perspective. That's it for this edition of "All-Star Entertainment Wrap-Up." Until next time, keep "reaching" for the "stars"!

Posted by Jack Pendarvis at 8:42 PM