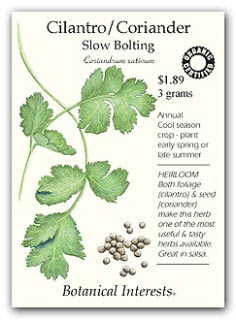 Time once again for "Foodstuffs!" Just like the last "Foodstuffs!" this one features John T. Edge, who has an article about hummus in today's New York Times. Among its many incidental pleasures is discovering the existence of the U.S.A. Dry Pea and Lentil Council. They're in Idaho! Now on to more sinister "Foodstuffs!" Though I alluded to John Currence's trip to the White House in the most recent edition of "All-Star Entertainment Wrap-Up," the lighter nature of that feature did not allow me to focus on the "cilantroversy" in the White House garden. John Currence calls it "the cilantroversy," but I am afraid I am going to have to insist on the more traditional - if less catchy and clever - "CilantroGate 2010." Currence says that the cilantro in the White House garden flowered early. If I am recalling his explanation correctly, the essential oils were not being produced, causing the herb to go bitter. "That cilantro is the only thing in the administration not leaking oil," Currence, a New Orleans native, jested bleakly.
Posted by Jack Pendarvis at 6:32 AM