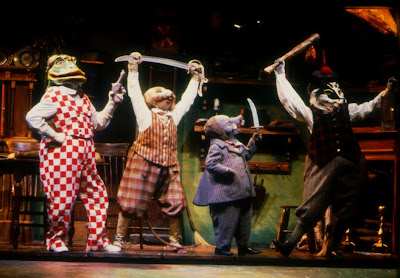 John T. Edge ate a muskrat! I saw it on twitter! "Like anchovied duck" is his lovely way of describing the flavor. He can't help it! He's even a good writer on twitter! But somehow this undermines my constant reminders to everyone that I have never eaten a possum. On the plus side, the title I made up for this "post" has given me the name of the main character in my upcoming series of delightful children's books. I'm not going to add a picture of a muskrat here because I just can't under the circumstances. Maybe the characters from THE WIND IN THE WILLOWS. (Hey, this is a great picture! I should plug the "web" site of the guy who made the awesome foam heads.) PS: THE OXFORD COMPANION TO FOOD has an entry for muskrat! It says that "an annual muskrat dinner is a fixture with certain gun clubs." It also says to be sure and remove the stink glands! That's your muskrat cooking tip of the day. Except THE OXFORD COMPANION TO FOOD is classy and says "scent glands."
Posted by Jack Pendarvis at 5:37 AM