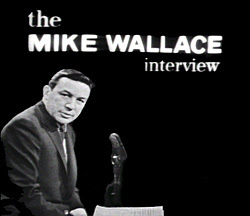 You know I pride myself on my expert Googling. But when I got curious about the subject of the aforementioned NPR interview, and entered the key words I thought would help me find the interviewee's name, I was led to conspiracy theories - as usual! Turns out the "internet" is full of them! The one to which Google led me claimed that George W. Bush's father was President Kennedy! But I am not going to "link" to it because I don't wish to lead you into that particular quicksand. So then I got the bright idea of checking the local public radio schedule instead. And I found the guy, whose name is Greg Cartmell. And I listened to a sliver of the broadcast. And I found that I had misled you in one respect! He did not paint Ken Wahl! He did, however, paint Ken Berry (as reported), Farrah Fawcett, and Mike Wallace (which I misheard somehow as Ken Wahl - that's how rumors get started!). And he does say (as I also correctly parroted) that he painted the official portrait of Barbara Bush. Nonetheless, his "web" presence isn't what it could be. (Hey, wasn't this more interesting in awkward fragments, when I had no idea what I had heard? Ha! That was a trick question. Nothing is interesting.) I found this gallery, on which there are not many portraits, though there are some nude fairies sitting on flowers. I listened to enough of the show to confirm that they did talk about knife-throwing, which arose because Mr. Cartmell is a knife maker.
Posted by Jack Pendarvis at 6:29 PM