The Universe Wants Me to Keep "Blogging" 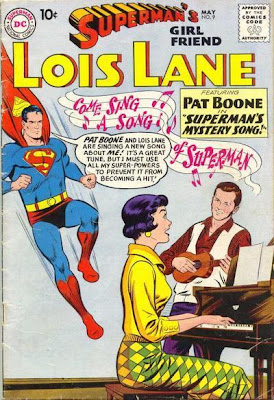 Boy! I could have gone on and on with that last "post." But I stopped. The 70s Captain Marvel reference, plus the emphasis on dubious entertainment, almost made me reveal unto you a "link" that Phil sent me last night. It would have been perfect! So why did I stop? I guess I was feeling bad about myself! Maybe I was thinking it was dumb to "blog" about things that no one could or should possibly care about, including me! "I will seem like a lunatic!" may have been one of my thoughts. But when, oh when, will I learn never to forget what Chuang Tzu said about "blogging"? So look. If you dare! Here is the "link" ("click" here) that Phil sent me. Phil doesn't seem to think much of it. "If I can scorch my eyeballs, so you can you," he writes. He refers to Loretta Swit's singing via dismissive quotation marks. It's from a musical about Superman! Here's the thing. I recall specifically begging for permission to stay up really late and watch this on TV one night. It was being shown at some ungodly hour. This was before the dvr had been invented, if you can believe it! If you wanted to see a terrible musical about Superman you had to stay up late! And it only came on once and you could never, ever see it again. Until now, through the magic of youtube, where every shameful artifact of the cultural abyss from which my emotionally paralyzed generation sprang has been lovingly preserved. And though I saw it only that once - like 35 years ago or something! - I think I remember a joke from it (which I have not confirmed through further youtube viewing): a powerful laser (or something) burns Superman's hand and someone advises him to "put a little butter on that." Strangely, I also remember my brother and I going around the next morning chanting the first thing you hear in the clip Phil happened to send. So why the change of heart? Why the addendum? Well, when I was looking for a picture of Pat Boone with which to illustrate that last "post," I came across this illustration (above) featuring Pat Boone and Superman. And I was like, "It's an omen!" That's what I was like. Oh, and I remembered the name of the actor who played Captain Marvel - Jackson Bostwick - without looking it up. I always remembered it! Maybe I didn't use it in the last "post" because I was ashamed of my "blogging"! But I owe Mr. Bostwick the identical apology I recently offered Robert Walden. When will I ever learn?
Posted by Jack Pendarvis at 9:36 AM