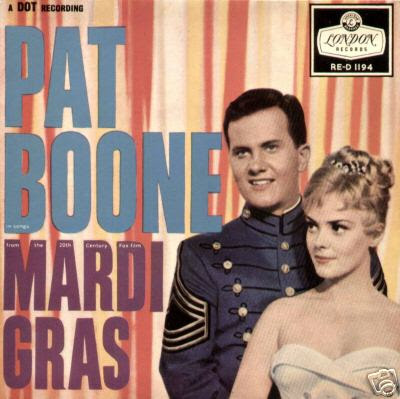 I was up at five in the morning for no good reason. The Fox Movie Channel was showing a movie called MARDI GRAS, starring Pat Boone, the go-to guy when you're making a movie about Mardi Gras. I didn't watch too much of it. Why not? Well, take a gander at these lyrics to the phony baloney ersatz blues song Pat was crooning: "Saxophones keep honking/ And I keep honky-tonking/ Trying to lose/ Those disturbin' Bourbon Street blues." Holy cow! Right before that, TCM was showing a Ken Berry movie. Ken Berry! Gone from my consciousness for lo these many years and suddenly he's everywhere - last night, costarring with First Lady of the American Theatre Helen Hayes. I know, you've never heard of Helen Hayes. OR Pat Boone, who is the OPPOSITE of Mardi Gras! I can't help it! You're probably better off. How can I put this? Ken Berry is NOT the First Lady of the American Theatre. Let's see. It's as if Screech from SAVED BY THE BELL starred in a movie with Meryl Streep. That example is not apt. Not apt! Plus you probably don't know who Screech is! You have moved beyond my orbit of references, and I salute you. You win. You win, world! I give up. I give up in general. Except to tell you that I took an acting class in college and one day the guy who played Captain Marvel on Saturday morning TV in the 70s was our special guest speaker and he told us he used to play cards with Helen Hayes. Now that's some sizzling celebrity gossip you can take to the bank! 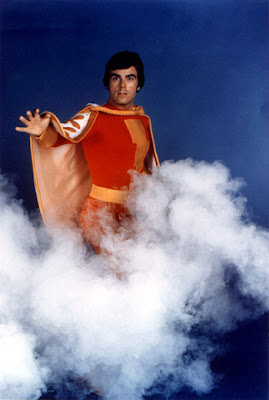 Posted by Jack Pendarvis at 7:23 AM